Having touched upon the subject in Rules for Playing in a True Taste Op. 8 (1748) and A Treatise of Good Taste in the Art of Musick (1749), Geminiani provided keyboard players with three versions of a treatise on the creation and performance of accompaniments from figured and unfigured basses. Its first manifestation, appearing in French in 1754 under the title L'Art de bien Accompagner, was revised and expanded for the publication of full-length versions in English and (despite an Italian title-page) French as The Art of Accompaniament and Arte d'Accompagnare, each issued as Op. 11 and in two parts in 1756-7. 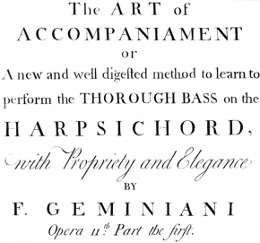 Throughout the treatise in all its forms, Geminiani provides firm rules for the correct realisation of harmonies and particularly the preparation and resolution of discords, but he also insists that the ear must be the judge of what is acceptable and that players must adapt their style of realisation to suit the composition to hand. His music examples correspondingly demonstrate a range of possible solutions to a succession of harmonic progressions increasing in complexity from a single root-position chord to passages as long as a sonata movement.

While in each 18th-century publication the word-text was printed at the front of the volume and thus separated from the engraved music-text behind, in the new edition words and music are interspersed so that Geminiani's remarks can be read alongside the music examples to which they relate. Moreover, the verbal texts from all three original editions, which regularly offer different perspectives on the same point, are transcribed in parallel columns for comparison.

The music examples themselves are reproduced in facsimile to preserve the niceties of Geminiani's idiomatic notation, which includes notes with strokes through their tails, tail-less note-heads and other devices intended to demonstrate without words the notes' various harmonic functions.

The music examples themselves are reproduced in facsimile to preserve the niceties of Geminiani's idiomatic notation, which includes notes with strokes through their tails, tail-less note-heads and other devices intended to demonstrate without words the notes' various harmonic functions.

The player is assisted in interpreting Geminiani's musical and verbal texts by Peter Williams's new Introduction and Critical Commentary, and the edition is supplemented by a full facsimile reproduction of L'Arte di Accompagnare, an 18th-century manuscript containing extracts from one of the published versions of the treatise adapted and translated into Italian and preserved in the Museo Internazionale e Biblioteca della Musica in Bologna.