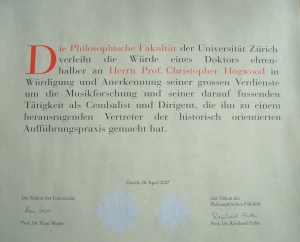 On 27 April, Christopher travelled from New York (where he was attending and supporting the AAM concert at Carnegie Hall) to Switzerland to receive an honorary doctorate from the University of Zürich. This doctorate, recognising Christopher’s work in the field of performance practice and musicology both reflects and extends his commitment to Swiss musical life; Christopher has worked for many years with Tonhalle Orchestra Zürich, Kammerorchester Basel and the Paul Sacher Foundation and returned to conduct performances of Schumann’s Manfred with Tonhalle for the Zürich Festspiele in June this year.