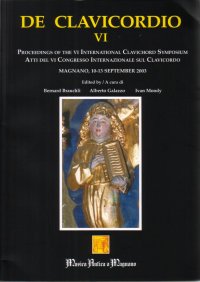 This is the first of Christopher’s two contributions to the newly-published De Clavicordio VI, which introduces the material published in his edition of ‘fitt for the Manicorde’, published in October 2003 by Edition HH.

Any suggestion of a clavichord presence in England or France is usually rebuffed with quotations such as: ‘A land without clavichords’ (reportedly said of England) and ‘a box of flies’, (a description of the clavichord by the French). If the proposition merits a third nail it will surely come from John Robinson, who complained that ‘The clavichord gives a fretful waspish kind of sound, not at all suited to tender expression’ (Supplement to Encyclopaedia Britannica, 1801). All three quotes are retrospective and none evaluates the evidence logcally.

It is certainly true that, although there were clavichord makers in France and in England, no instruments manufactured in France, and few (if any) manufactured in England have survived — the instrument attributed to ‘Peter Hicks’ in the Victoria & Albert Museum is a puzzling rogue. The Musicalischer Almanach für Deutschland announced in 1782, that

As is known, the English do not make any clavichords at all.

About their presence in England, Mattheson (Critica Musica, 1722) pointed out that:

When it is said that clavichords are to be found nowhere but in Germany, and then, that a clavichord has been heard in England in the home of a German organist, then [one must conclude that] there must be clavichords in England, at least among the Germans there (of which there are quite a few now). There are people living here in Hamburg who each year send as many clavichords as they can make to England, Spain, Holland, etc. So where are [these clavichords]?

The ‘box of flies’ quote appears to stem from a more recent source, Robert Wangermé’s La musique flamande dans la Société des XVe et XVIe siècles (Brussels: Arcade, 1965), where he escribes the clavichord as sounding like a ‘concert de mouches’. For the third, ‘waspish’ quote it is worth reinstating the reputation of Mr Robinson a little, since that one critical phrase is so often taken out of context. John Robinson, (1739–1805) was not, as many assume, a bad-tempered journalist with pretensions to modernist sensibilities, but am immensely learned Scottish authority pn physics, stronomy, mathematics and mechanics, and also an expert on keyboard instruments and temperament (he described a fascinating type of clavichord which he claimed was invented by Euler, and of which no other description exists).

We assume the piano, like the organ (metal, wood, reed or bamboo) to have no frontiers. But rarities in other categories like the cimbasso, eulean pipes, bandoneon, ud, sitar, didgeridoo and many others are readily definable and the instruments appear strikingly exotic outside their home territories. Can the same, however, have been true for an instrument as long lasting, simple and basic as the clavichord within Europe?

There is here a danger of confusing the country of origin with the field of performance and we must distinguish, for instance, between clavichord music in France and music from France played on the clavichord elsewhere.

The presence of French music in foreign sources, both printed and manuscript (such as Lüneburg, Ratsbücherei, Mus. ant. pract. 1198, c.1687, and many Scandinavian tablature sources listed in Jan Olof Rudén, Music in tablature, [Stockholm, 1981]) suggest performance of this repertoire on the clavichord was widespread outside France. Marpurg (Kritische Briefe, 1760) includes Dandrieu amongst his selected keyboard pieces for the instrument, and the Austrian monk Maximilian Piessinger, (c.1780) declared certain French music (including Couperin) best on clavichord; Bach himself, of course, copied out Couperin’s Les Moissonneurs in the Notenbuch für Anna Magdalena Bach which would surely have been played on the clavichord in the Bach household. The sole occurrence of French keyboard music in an English manuscript that mentions the ‘manicorde’ was recently published in the volume ‘fitt for the Manicorde’ (Edition HH, 2003).

Another source of confusion is the assumption that the requisite or preferred instrument will be automatically mentioned in the title of a keyboard volume. Manuscript keyboard collections generally gave prime place to the owner’s name not the instrument, for obvious reasons. Only organ music was sometimes specifically marked as such, and later designations such as the English ‘virginals books’ are misleading. Elizabeth Rogers’ Virginal Book, for example, usually described as the ‘last of the virginal books’ is actually the first and only one to use the name of the instrument in its title. Similar familiar titles were in fact applied well after the event: The Fitzwilliam Virginal Book, My Lady Nevells Virginal Book and similar were given these workiing titles long after they were written. The number of occurences of such a title, and in fact the number of individual pieces described as suitable for ‘virginalls’ is relatively small. If direct references to the ubiquitous and highly-visible virginals are so few, what hope for the more private clavichord?

Here are ten ‘signals‘ (in declining order of explicitness) that may help to decide the ‘designated keyboard’ question:

• Evidence in the title: ‘A Pavan for the Virginals‘, ‘Allemande for the clavichord‘ (such indications are rare; for the only known English clavichord example see the second part of this paper).

• The generic title or nature of the volume (domestic, church) — though many collections are mixed — or the notation (e.g. tabulature notation which is instrument specific)

• Internal evidence of the piece (e.g. Peter Philips‘ Pavan dolorosa which requires the use split keys and short octave; also many English organ voluntaries which imply the use of organ registers divided between C and C sharp)

• The range and chromaticism of the piece, especially with reference to the limitations imposed by double or triple fretting (see, for instance, Michael Zapf‘s analysis of Froberger for clavichord, given in Pfullingen 2003, and Darryl Martin’s studies on intabulations of lute music)

• A similarity in style to another more specific piece (e.g. an affetuoso sonata by C. P. E. Bach similar to one that also contains a definitive indicator, such as the use of Bebung)

• Documentary evidence of instruments associated with the source of the music (e.g. the references by Samuel Pepys to keyboard instruments built by John Hayward suitable for 17th century music, J. S. Bach’s inventory of home instruments, dedications such as C. P. E. Bach’s reference to his Silbermann clavichord, and the description of his use of this clavichord by Charles Burney).

• Documentary (including iconographic) evidence for the existence of contemporary instruments in a country which are no longer extant. (It is, however, worth observing that no single English lute survives from the period of the most extensive English repertoire for that instrument)

• Lastly, the possibility that no specific keyboard was either designated or imagined by composer; this category allows for the ‘feels-right’ factor, despite there being little objective evidence for such use (e.g. lute music in transcription for the clavichord).