Handel's anniversary year comes to an end with a new documentary — and an inevitable pun: Barockstar, directed by Ulrich Meyszies and released on DVD by Arthaus Musik, 'tells the story of Handel's life as he journeyed through baroque Europe, leaving Germany for Italy and experiencing Florence, Rome and Venice, before arriving in London to begin the career that would bring him a worldwide reputation'. It features contributions from Christopher, as well as footage from Handel House Museum, where Christopher curated this year's keynote exhibition, Handel Reveal'd. 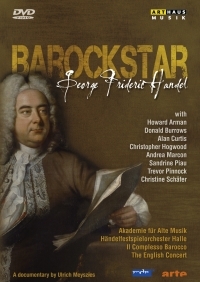 Donald Burrows — like Christopher, a Handel biographer — adds to the commentary, along with Howard Arman, Alan Curtis, Andrea Marcon, Sandrine Piau and Trevor Pinnock, as the film traces Handel's path from Halle, through Italy's flourishing operatic nuclei, to London, where a public, and largely imported, Italian opera scene was just getting off the ground. Musical illustrations are provided by The English Concert, the Händelfestspielorchester Halle, the Akademie für Alte Musik Berlin and Il Complesso Barocco.

No doubt the documentary's title was inspired by the disc's special feature on 'Handel and Hendrix': the two musicians were next-door neighbours in Brook Street, albeit two centuries apart. Other extras include segments on 'Handel and Ruspoli' — with Prince Ruspoli-Sforza and Princess Claudia Ruspoli, descendants of one of Handel's great patrons — and 'The Handel organ in Vallerano'.