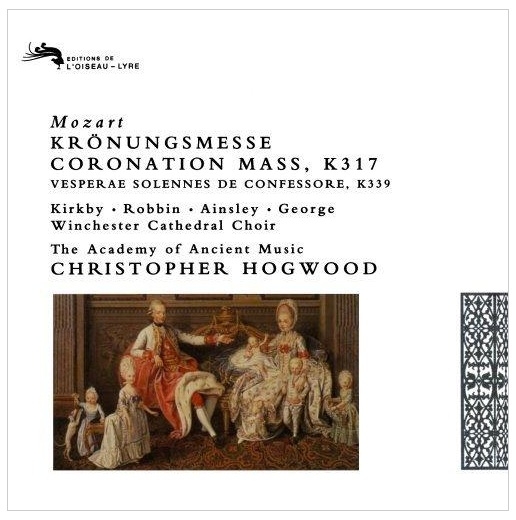 It’s difficult to think of many recordings of Mozart’s church music that so happily capture its character – the particular mixture of confidence, jubilation and contemplation – as Hogwood’s. His unfussy direction, broad phrasing, lively but generally unhurried tempi and happy details of timing serve splendidly in the Coronation Mass, the finest of Mozart’s completed Mass settings; the solemnity of the Kyrie, the fine swing of the Gloria and the energy of the Credo, with due pause for its rapt moment at the ‘Et incarnatus’, all these come over effectively. Arguably the ‘Osanna’ is rather quick, but its jubilation is splendid. And the sweetness of the Benedictus is ravishing.

Not more so, however, than the Agnus, for there, at a decidedly slow tempo, Hogwood allows Emma Kirkby to make the most of this very sensuous music, which she duly most beautifully does. The soloists are altogether an excellent team, with two refined voices in the middle and Michael George a firm and sturdy bass. The inclusion of the K278 Epistle Sonata is a happy notion. The Vesperae solennes de confessore is a setting of the five Vesper psalms and the Magnificat, made in 1780, a year after the Mass, for some church feast in Salzburg. With admirable singing from the choir and a spacious recording with exceptionally good stereo separation that properly conveys the ecclesiastical ambience, this is a disc to treasure.