“Christopher Hogwood rises to the challenge of this poignantly sombre production by drawing superbly expressive playing from the OAE and equally fine singing from the Royal Opera Extra Chorus”, wrote The Times.

The production is notable also for the ROH debut of Sarah Connolly, a “classically tragic Dido” (Financial Times), who led the following cast: 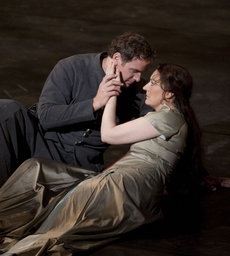 “Musically, Christopher Hogwood leads the Orchestra of the Age of Enlightenment with spring and energy, although he is highly sensitive in the introspective, tender, and tragic moments. His continuo section—harpsichord, theorbo, cello, and chamber organ—is impressive, and he can get a true rumble out of the whole band very effectively (the music before the Witches' Dance truly growls). His is not a dainty performance—there is plenty of vibrato from singers and players alike—and orchestra and chorus are as remarkably expressive as they are musically solid and certain.” (ClassicsToday.Com, Robert Levine) Purcell's opera formed one half of “a magnificent double-bill” (The Telegraph) completed by Handel's Acis and Galatea, which is itself due for release on DVD in March 2010.

Dido and Aeneas is available now on both DVD and Blu-ray Disc and distributed by Naxos and Opus Arte, the latter offering this video clip.