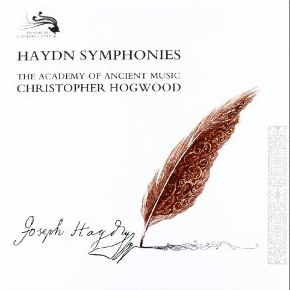 The set (though sadly incomplete) includes not only the symphonies recorded between 1988 and 1995, as part of the “complete“ Decca project, but also four London Symphonies recorded earlier as LPs in 1983-4. The only recorded symphonies that are missing are, alas, numbers 76 and 77, originally recorded for the "complete" project but eventually issued as a single CD by BBC Music Magazine (recorded in 1996 and issued in the May 2005 issue). The box set is available from Amazon or Amazon Italia

There is an interesting introductory essay by Massimo Rolando Zegna, suggesting that the project, which was terminated by Decca before completion, can be regarded as an interesting classical torso. The essay can be found in full below.

An imposing headless statue from the classical age: that is the impression given, after all these years, by the complex and uncompleted discographical operation that Christopher Hogwood has devoted to Franz Joseph Haydn's symphonies. A mighty undertaking, unfortunately not brought to a conclusion by this British maestro but admirable for its importance all the same, as is equally the case with so many ancient sculptures, only roughly shaped by the artist or mutilated by time and neglect, yet artistically more significant than other perfectly completed works. This is because Hogwood's project mapped out a new image of the celebrated Austrian composer, marking a point of no return for our understanding and knowledge of "a musician who for a long time has been misunderstood".

With these lapidary words Hogwood defined Haydn in an interview that he gave in 1997. About two years previously he had released the latest recordings he had made for his discographical project (in September 1995, Symphonies Nos. 62, 63, 70, 71, 74) and there were still possibilities of continuing with the undertaking.

A composer poorly understand [understood] and compositions previously approached in the wrong way. Why? To the legitimate question raised by his brief remark Hogwood responded with other words, but the real answer, the longer answer, was there, in the seventy-seven symphonies (the first seventy-five in the catalogue of Haydn's works plus Nos. 107 and 108) that he had recorded with the period instruments of his Academy of Ancient Music in the course of some seven years of work, between November 1988 and September 1995. They have been joined, in this new presentation, by Nos. 94, 96, 100 and 104, which were recorded earlier, between September 1983 and August 1984.

Born in Nottingham, England, in 1941, Hogwood has always been attracted by difficult, long-term undertakings. When he was a student at Cambridge a good deal of ancient music was performed, but there was not yet much talk of doing so on period instruments. Those were the years of Raymond Leppard and Thurston Dart. The latter, unfortunately, began to take an interest in ancient instruments only shortly before 1971, the year he died, leaving the field practically unexplored. In 1965, while busy with positive and portative organs, hurdy-gurdies and clavichords, regals and harpsichords, Hogwood had started to collaborate on the medieval and renaissance repertoire with David Munrow - also a student at Cambridge then - and his Early Music Consort. For Christopher, the Middle Ages appeared to be a "must", since his studies until then had been aimed precisely in that direction: but in those days to talk about medieval and renaissance instruments almost meant talking about "reinvented" instruments: and it was not easy to set in motion work founded on a historical basis.

More or less in the same period, Hogwood had also started to collaborate with the Academy of St Martin-in-the-Fields, founded by Neville Marriner: an important undertaking and a very useful one for the purpose of gaining a solid grounding in another repertoire, that of the seventeenth and eighteenth centuries. He performed music by Telemann, Vivaldi, Handel, Monteverdi and the Baroque in general, but always with modem instruments.

In 1976, after the tragic disappearance of Munrow at the age of only 34, Hogwood intensified the performing and recording activity he had already begun with the Academy of Ancient Music, the orchestra equipped with ancient instruments which he had founded three years previously with the aim of applying period performing practices based on the very latest musicological research. It became necessary to reconsider all aspects of performance and interpretation in the light of the new ideas, learning a new language and constantly verifying its grammar. A very hard task. It was only later, when the group had mastered this new language, that it become possible to perform with greater freedom.

Meanwhile, the first LP had appeared in 1974, and from then on Hogwood's name was associated with the frieze - taken from the decoration of a Ruckers harpsichord – that embellished the period paintings on the covers of the records issued by L'Oiseau-Lyre. In the early years, Hogwood devoted himself exclusively to baroque works: above all, initially, those that had previously been excluded from performances and recordings. His way of making music was based on enthusiasm, of course, but also on planning the work in a way that corresponded to the need to proceed, as far as possible, in chronological order, venturing into unexplored periods only after acquiring a firm footing in the preceding historical age.

It was not long, however, before a change of direction came. In about 1978 the British conductor embarked on a series of demanding recording cycles devoted to the three great exponents of what Charles Rosen defined as "the classical style": all the symphonies and concertos for piano and orchestra by Wolfgang Amadeus Mozart, all the symphonies and concertos for piano and orchestra by Ludwig van Beethoven and, of course, all the symphonies by Haydn. This marked the beginning of a new stage in Hogwood's career, constructed on the conviction that the importance of textual research - essentially of a musicological nature and of performance as such was fundamentally different, but also that it was absolutely necessary to establish a working relationship between them. Thus the recording became the conclusion of a profound investigation of each individual composition, drawing on period sources, musical or otherwise. Furthermore, according to Hogwood, the possibility of overseeing all the aspects of research necessarily had to be limited only and exclusively to small recording projects, whereas it was necessary to resort to a "guru" of musicology - a person who had devoted a substantial part of his life to the composer in question - for more extensive undertakings.

Having allowed himself to be guided by the American musicologist Neal Zaslaw for Mozart and Professor Clive Brown of Oxford University for Beethoven, for Haydn's symphonies Hogwood turned to Professor James Webster of Cornell University in Ithaca, in the state of New York. The consequences of his work affected not only strictly performance aspects but also of general understanding. The most evident aspect of Webster's studies was concerned with a profound reconsideration of the various combinations of instruments that Haydn had at his disposal in the various periods of his musical activity. Haydn conceived and wrote most of his works for a particular group of performers and for very specific circumstances, and Webster did everything possible to define in the most reliable way the size of the ensembles and the specific instruments used by Haydn on the occasion of the first performances of his symphonies.

Essentially, during much of his life Haydn wrote for an ensemble that would now be defined as a chamber orchestra. More specifically, according to Webster's conclusions, which Hogwood applied in his recordings, until the 1780s the orchestra was quite small in size, with 13 to 16 members until the end of 1767, from 16 to 18 until 1775, and with a maximum of 24 in the 1780s. Only in London did the forces available to Haydn reach sizeable proportions, with 40 musicians in the years between 1791 and 1794, and 60 in 1795. Moreover, Webster's research led to the exclusion of trumpets and timpani from many of the symphonies (mostly youthful works), and to the decision, in the symphonies written before about 1776, to entrust the bass part to a cello, a double bass and a bassoon. Lastly, there was the question of providing a keyboard continuo. According to Webster's conclusions, in his symphonies Haydn never used keyboard instruments, with the sole exception of the performances given in London, when the composer himself played a fortepiano.

This series devoted to Haydn's symphonies is probably the most ambitious recording project that Hogwood has embarked on, and one of the most impressive that has been undertaken in the world of period instruments. A project that sets out to counter a lack that is not only "quantitative" but also "qualitative": or, rather, that seeks not only to spread awareness of a very extensive and unfamiliar area of Haydn's output but also to provide an interpretation closer to the spirit and wishes of the composer.

In that interview in 1997, Hogwood talked about himself, his memories, his projects and the idea of Haydn that he had developed over the years. He talked about a composer who, for many years, was only known to have written nine symphonies, like Beethoven, and who for a long time had been considered a light-hearted, superficial composer, adding that perhaps it was because, unlike Mozart, who somehow or other serves up music all fully formed, Haydn finds satisfaction in clearly enlightening us on the logic of his derivations: it was, he said, like the little voice on TV that gives a step-by-step explanation of what is happening.

But he also spoke of another Haydn, quite the opposite of immediate, one who lived in profundity: a learned master of balance and form. A composer whose secrets of composition as applied in the organisation of his symphonies, such as the references to the golden ratios of classical art, had only been revealed by computer studies. The proportions that in the past had inspired the architecture of Leon Battista Alberti and the musical instruments made by Stradivari. Hidden proportions that Hogwood sought to restore in his recordings by performing all the repetitions and ritornelli [da capos] prescribed by the composer.