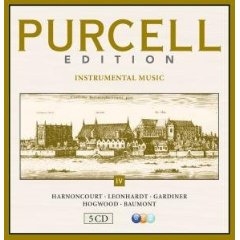 Issued by Warner in June 2009, Volume 4 of the Purcell Edition includes two re-issues of Christopher's Decca L'Oiseau-Lyre recordings on CDs 2 and 3 of this 5 CD set featuring other artists such as Harnoncourt, Leonhardt, Gardiner and Baumont. The recordings continue to receive excellent reviews many years after their recording:

"Discs two and three are however the heart of the matter as regards instrumental music. The Twelve Sonatas of Three Parts are played by Beznosiuk, Podger, Coin and Hogwood, recordings made in 1995 and still very much a living part of the Purcell chamber discography of choice. The individual movements of the sonatas are not separately tracked but that’s of little account, so warm and zesty is the playing, so rhythmically vital and imaginative too. Let’s just cite the refinement of the Presto of the second sonata and of the phrasal breadth of the same work’s Adagio. The lightly etched dissonances of the D minor [No.3] or the noble tread of the Sonnata opening to No.6 are two more exemplars of the instrumental and expressive excellences achieved by this ensemble.

The Ten Sonatas in Four Parts were played by Catherine Mackintosh and Monica Huggett with, once again, Coin and Hogwood. The recording date back to 1982 and was an LP staple. The playing here is of robust sensitivity, and impressive, the two star fiddlers acquitting themselves with distinction. The Canzona of the B minor [No. 1] is a perfect example of the control and balance of the playing whilst the richly etched dynamism and rhythmic lift of the Vivace of No.7 attests to the drama of the performances." Jonathan Woolf, www.musicweb-international.com 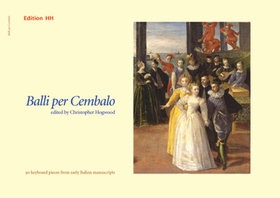 Christopher has also recently received praise for his "exemplary" editing work of Balli per Cembalo, published by Edition HH in 2007. "This is the first modern edition of the pieces in their original note values and also included is the illuminating information on proportional notation...There is a comprehensive critical commentary containing an invaluable concordance of these dances with lute sources in particular". John Collins, Harpsichord & fortepiano.