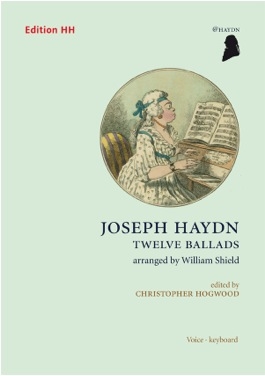 Haydn’s first set of Lieder, adapted for the English market by William Shield, who was to become his close friend, were an instant commercial success, with the most popular of them reissued separately not only in England but also in Ireland and America. The present edition reinstates a large number of Haydn’s musical details — dynamics, articulation, accidentals, and even accompanying figures in the keyboard part — present in his German originals but missing from Shield’s English edition. Generously illustrated with facsimiles from the original publications, which were notated on two staves, the new edition, the first in 200 years, uses three staves to clarify the voice and keyboard parts, and includes an Introduction and full Critical Commentary.

The cover image is a reproduction of A Lady Playing on a Harpsichord, engraved by Isaac Cruikshank (1764–1811) after George Murgatroyd [“Moutard”] Woodward (1760–1809). From the collection of Christopher Hogwood.