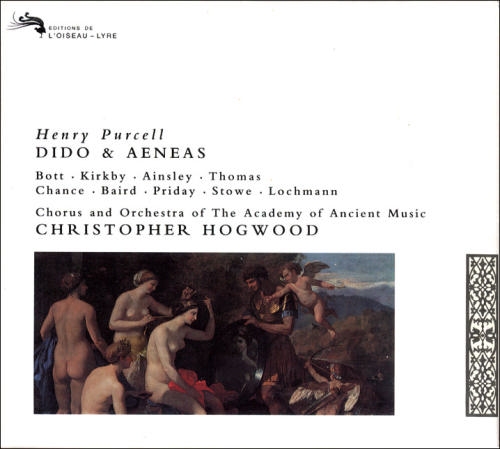 “The choral singing is of the highest standard all the way through. The suave Academy of Ancient music is tidy and refined under the direction of Christopher Hogwood.

“The singers and players of the Academy of Ancient Music respond willingly to Christopher Hogwood’s sensitive direction. John Mark Ainsley is a romantic, valiant and heroic Aeneas, Emma Kirkby’s Belinda is exquisite, and Catherine Bott is a riveting Dido.

“During my initial, blind listening, I made copious notes on each track of each recording, mainly so that I wouldn’t change my mind once I had revealed to myself who I’d been listening to. While revelling in Christopher Hogwood’s version, or recording V as I knew it then, I simply resorted to larger and larger ticks when Dido started to sing.”


Christopher will be conducting Dido and Aeneas in a double bill with Handel’s Acis and Galatea at the Royal Opera House, Covent Garden, opening next week (March 31); for this production (by Wayne McGregor) he will be conducting the Orchestra of the Age of Enlightenment, with Sarah Connolly as Dido. See the Calendar for fuller details. Previews of the production recently appeared in The Times and on the reviews and features website musicOHM.