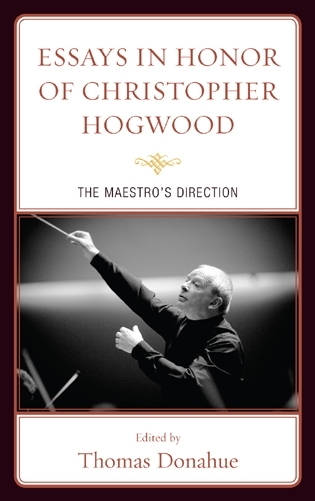 The Festschrift format consisting of essays by prominent scholars is an increasingly popular vehicle in academic publishing, though the nature of the particular Fest is not always immediately apparent. But judging from the Hogwood Chronology in the introductory matter, I think this volume must mark Christopher Hogwood's 70th Birthday.

Hogwood's achievement is both wide-ranging and of considerable depth. This presents any editor with a difficult task in choosing contributions genuinely reflecting the interests of one of the leading scholars and performers of our day. Should he deal with one field in depth, or with all of them, accepting that the treatment of some fields will be less than optimal? Thomas Donahue has gone for the first approach, since of the eleven essays, six deal with aspects of keyboard organology (and four are focussed on the clavichord) while the other five sit somewhere between performance practice and the editing of music, but with heavy emphasis on the keyboard repertoire. That is understandable, since Hogwood started his musical career some years ago as a keyboard player. He has an extensive collection of early keyboard instruments, and is a distinguished ambassador for the clavichord and a persuasive performer on it, as an hour spent listening to The Secret Bach or one of his parallel CDs of Handel and Mozart will show.

Some of the contributors are acknowledged scholars, there is one essay from a young PhD student, and two from seasoned performers whose profiles and abilities match those of Hogwood himself. The book is nicely produced in hard covers and is fully illustrated, although only in monochrome, on which point I must add a note of disappointment - the opportunity exists now to link a book with a website giving access to high-resolution illustrations in full colour and it is a pity that has not been done, although of course, it is still not too late.

This book will be of primary interest to keyboard players and to keyboard organologists in particular; indeed for serious scholars of that subject it is a 'must buy'.