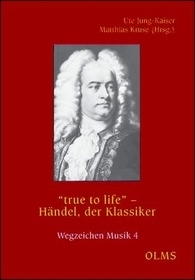 "Although Handel and Gottlieb Muffat never met, Muffat's name is well known to Handelians as the source of the extensive but unacknowledged 'borrowings' Handel made in his Ode for St. Cecilia's Day and the Concerti Grossi op. 6, all deriving from Muffat's Componimenti musicali published in 1739. There are also modified quotations from Muffat in the op. 7 Organ Concerti and in Judas Maccabaeus, Joshua, Solomon and Theodora. The balance is redressed somewhat by considering Muffat's acknowledged 'recreations' of Handel's most famous keyboard publications, the eight suites (Suite de Pieces Pour le Clavecin, first issued in 1720) and the set of fugues (Six Fugues or Voluntarys of 1735)".

The Handel originals have received much scholarly attention but this essay is the first on Muffat's valuable adaptations, which became available in print only with Christopher's editions for Ut Orpheus Edizioni in 2007 (suites) and 2008 (fugues).