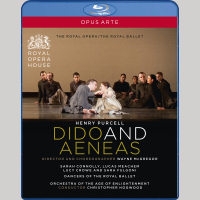 April's issue of Gramophone Magazine featured a review of the DVD of Dido and Aeneas which was released in October 2009. The live production had been described as 'an evening of exquisite sensual pleasure' (The Telegraph) and Richard Lawrence, who reviews the DVD in Gramophone, believes that this is “a Dido that works better on screen that it did on stage” owing to the film direction of Jonathan Haswell. He also writes that Christopher “conducts with sensitivity, the langorous “Thanks to these lonesome vales” being a high-point, and the musicians of OAE respond to his direction with a spring in the step”.

More recently, in June's issue of BBC Music Magazine it was written that "under Christopher Hogwood’s shapely musical direction the score engorges the amplitude of the Opera House without forgoing any illuminating period pertinence.".

The DVD of the second performance, Acis and Galatea, was released in March so both are now available on DVD and Blu-ray Disc and distributed by Naxos and Opus Arte