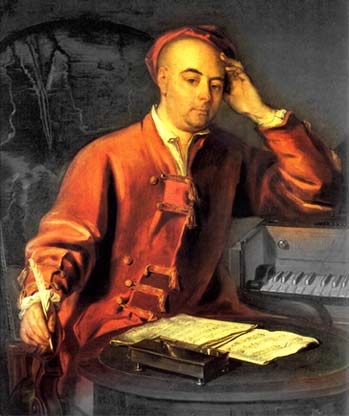 In the first, Christopher, NEMA’s President, reminds us of the unparalleled esteem in which Handel was held by his contemporaries and by the likes of Beethoven in the nineteenth century, and regrets the ignorance with regard to Handel’s operas that has unjustly sullied the composer’s reputation in more recent times.

In the second article, Andrew Woolley demonstrates the significance of even the most spurious of Purcellian works to be included in the forthcoming Purcell Society edition of the Complete Keyboard Music, edited by Christopher.

These articles appear below.


We are delighted to be able to open our collection of brief essays with one by our President, the first of three anniversary articles in a bumper year. Christopher Hogwood needs no introduction as a performer, scholar or Handel expert. Here he reflects on Handel’s significance and hints at a still little explored area of his input.

In 2009 we have more than the usual number of major musical anniversaries to honour: Purcell, Handel, Haydn and Mendelssohn are on everyone’s list – and all to be fêted here with special patriotism for the work they did in England. More names can be added according to personal preference: I will be adding Martinu to the previous four (well out of NEMA’s range), but some will be celebrating the births of Charles Avison, Elisabeth Jacquet de la Guerre, Devienne and Franz Benda, or commemorating the deaths of Torelli, Graun and Eustache du Caurroy, plus others we as yet know not of.

So why a special bottle of champagne for Handel? Well, he chose to be English, so we have a special obligation. He was also the most voluminous of our candidates (in all senses); remember the old librarians’ measurement which noted that Handel’s music covered more shelf inches than all Bach and all Beethoven put together. And although he became an established classic within his own lifetime, with the rare honour of a statue erected while he was still alive to see it, he never relaxed his fierceness for improvement. Rather like those marathon winners who, despite leading the field by a mile, nevertheless manage a final sprint in order to better their own timing, Handel never took things easily or assumed that an old formula would work again or imagined that he had an immunity from criticism or exemption from the sheer hard work of composing.

We have today lost the knack of praising Handel with the ease of the 19th century. Beethoven on his deathbed simply pointed at his Arnold edition of Handel and declared ‘Das ist das wahre’ – ‘that is the truth’. Dean Ramsey in 1862 declared that ‘The works of Haydn, Beethoven, Mozart, Mendelssohn, Spohr and others – great masters – are performed, and they are admired, and justly so, but they have not the hold upon the taste and feelings (of Englishmen at least) that Handel has’ – adding, in a pre-echo of Elvis-mania: ‘He is the greatest, and the favourite. He stands alone’.

However, both these tributes (and many others of the time) were made in complete ignorance of Handel in his favourite milieu – the opera house. It was the sublimity of the vast religious choruses and the public ceremonial which moved men to tears and ladies to fainting. Quite what they would have made of Cleopatra or Agrippina (especially if they had removed all their clothing as they routinely do today) beggars the imagination. Rather perversely, it was the revival of Handel operas in the early 20th century that began to shake our confidence in his universality; they were quickly pronounced “incompatible” with modern theatre, and frequently oratorios would be staged as if they were operas (but with the intrinsic inconveniences of fixed choruses and miraculous happenings) doing nothing to forward the idea of drama, and landing Handel with (of all things) a reputation for being statuesque in the theatre. To a certain extent, this prejudice still prevails, and too often we find productions of the operas which feel they have to apologize for the music with nudity, helicopters and syringes.

It will be an uphill struggle to escape this unjust impression – but in the meantime, why not rescue that other great arena of dramatic and virtuoso vocal music, the private cantata, which the young Handel delivered so flamboyantly, and the older Handel borrowed from so regularly? Here we have a field of economic compactness, unsullied by theatrical directors’ egos (as yet), and free from cant and cosmetic ‘up-dating’, we encounter the same characteristics of the Handel that the 19th century so enjoyed – ‘Sublimity and grandeur, perfection of sweetness and tenderness, the beauties of extreme simplicity and those of marvellous learning and intellectual power’ (Alfred Whittingham, The Life and Works of Handel, London, 1882).

For our second anniversary article we celebrate the 350th anniversary of that ‘divine genius’, Henry Purcell, one of England’s greatest native composers. Andrew Woolley has recently completed his Ph.D. on English keyboard music and its sources from the late 17th and early 18th centuries, under the supervision of Peter Holman at Leeds University.

Much of Henry Purcell’s keyboard music is familiar today (or to keyboard enthusiasts at least). Howard Ferguson’s 1964 edition of the harpsichord music remains readily available (published by Stainer and Bell), and pieces such as the well-known ‘Cibell’ (the most common keyboard arrangement of which may not actually have been composed by Purcell) are occasionally found in popular anthologies. The most important and representative source is the posthumous A Choice Collection of Lessons for the Harpsichord or Spinnet, first published in 1696, which contains the ‘eight suites’, a group of pieces probably dating from the mid- to late-1680s to about 1694. Nevertheless, other sources contain a number interesting works, notably a small number for organ. Three are of principal importance: Henry Playford’s collection The Second Part of Musick’s Hand-maid (1689), a manuscript probably dating from the 1680s (Oxford, Christ Church, MS Mus. 1177), and a recently discovered autograph containing several known pieces in new versions and new transcriptions of the composer’s theatre music (British Library, MS Mus. 1).

An editor of this music faces several difficulties relating not only to the authenticity of the pieces (an issue common with the music of almost any 17th century keyboard composer) but also with the text, as many pieces survive in several different versions. Christopher Hogwood, editor of the forthcoming Purcell Society edition, first published in 1895, has adopted a refreshing ‘open doors’ policy where the authenticity of the pieces is concerned, which seems appropriate for the repertoire: ‘the current mood is not only less proscriptive than previously, but also more sympathetic to a view based on standards of “purity” then rather than now’ (‘The “Complete Keyboard Music” of Henry Purcell’, The Keyboard in Baroque Europe, ed. C. Hogwood, Cambridge 2003, 76). The new edition will present pieces in multiple versions simultaneously, principally the harpsichord suites, which survive in different versions in the autograph, in A Choice Collection, and in The Second Part of Musick’s Hand-maid. Moreover, it will be inclusive, reflecting the relaxed approach taken by contemporary musicians to authorship. The previous Purcell Society edition, edited by W. Barclay Squire (harpsichord music) and Edward J. Hopkins (organ music), and Howard Ferguson’s 1964 edition of the harpsichord music excluded some works on musical and source-based grounds, and some important resources, principally of transcriptions, were not available when they were produced.

The popularity in his own time of Purcell’s keyboard music, or transcriptions/settings of his music (e.g. settings of consort or vocal pieces), is apparent from the large number of contemporary sources that survive. Settings of Purcell’s theatre music were particularly popular, and it seems likely that many composers besides Purcell were responsible for them (being sources of ‘Purcell’s keyboard music’ in a loose sense). Indeed, Purcell himself set a hornpipe by John Eccles in the autograph (and other autographs of the same period contain settings of tunes by a mixture of composers). Several good sources of settings were compiled by composers, notably Philip Hart’s manuscript compiled for Essex Deane (Edinburgh, National Library of Scotland, Inglis 94 MS 3343). Another notably example is in the William Andres Clark Library, Los Angeles (M678 M4 H295 1710), which is also likely to have been compiled by a professional keyboard composer-performer for teaching an amateur. Although their connection to Purcell is tenuous, the transcriptions in these manuscripts and others like them will be included in the new edition; at least their inclusion will serve to illustrate the posthumous popularity of Purcell’s music over the period c.1695 – 1705.

In addition to containing all known transcriptions, the revised edition will include several original keyboard works omitted from previous editions. Notable among them is the so-called A major Toccata (ZD229), which was included in the 1895 edition, but has since been subject to a great deal of debate over its likely authorship. If it were to be included, however, ‘it is very possible that a work so much discussed might soon not exist in any reputable edition at all’ (Hogwood, ‘The “Complete Keyboard Music”’, 85). Other notable pieces for inclusion are those in the William A. Barrett MS (British Library, Add. MS 41205), an almand-corant-almand in A minor (Z642/1-2 and ZD218) and an almand-corant-saraband in B flat major (Z664). These pieces were omitted from the 1895 edition as the Barrett MS was not available, and Ferguson rejected them as ‘spurious’ on musical grounds. As a result, five have not appeared in print since Ernst Pauer included them in his anthology Old English Composers for the Virginals and Harpsichord (1879), and one of them (ZD218) has apparently never been printed. Their inclusion in the new edition will be particularly welcome: whilst the harmonic eccentricities of Z664 are curious, the A minor pieces are fine and deserve to be better known.

For various reasons the revised edition has had a long gestation period, but it is hoped it will be finished in time for the anniversary of Purcell’s birth (which occurred in either 1658 or 1659). In some ways it has been worth the wait as a number of new sources have come to light, or have become readily available, relatively recently (such as manuscripts now in the Foundling Hospital Museum Library formerly belonging to the late Gerald Coke). Certainly the ‘open doors’ policy of the edition will offer opportunities for musicians to explore this repertory in a new light.