Widely held to be the finest small museum in Europe, the Fitzwilliam Museum celebrates its position as a centre both of international heritage and of living culture with an online exhibition — The Fitzwilliam Museum: A Source of Inspiration — highlighting some of its treasures and examining their impact on artists of today. Christopher’s contribution may be read below and, alongside pieces by Alan Bennett, A. S. Byatt, Anthony Gormley and the late Adrian Mitchell, amongst others, on the museum’s website. 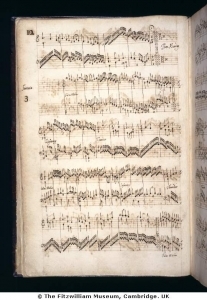 The Fitzwilliam Museum:
as seen by Christopher Hogwood

It has never seemed very sensible to me to treat musicology and music performance as separate — or even conflicting — areas of study; surely each is a part of the other.

When I first arrived in Cambridge in 1960, Thurston Dart was the prime and in those days lone advocate of pursuing both paths; he was keyboard player, orchestra director, musicologist, editor, writer, teacher and broadcaster — a fine and I thought very tempting mix. He was also blunt in his criticisms; seeing me in the street clutching a newly-purchased copy of the standard edition of the Fitzwilliam Virginal Book, he stopped me to point out that I had paid for ‘twenty errors on every page!’. He may have been exaggerating, but his proposed cure was most effective: ‘My dear sir, go to the Museum down the road and look at the real thing’.

One of the revelations of entering the Fitzwilliam Museum (in addition to the rare treat of it being air-conditioned in summer) was the unique combination of artefacts it displayed: paintings together with furniture, ceramics with carpets, frightening armour alongside fragile glass, Beethoven’s watch facing Handel’s bookcase.

The musical holdings of the library are still one of Cambridge’s best-kept secrets, but for the keyboard player, pride of place must go to the Fitzwilliam Virginal Book, bequeathed by Viscount Fitzwilliam to the University of Cambridge in 1816. The largest single source of a very English repertoire, this elegant manuscript contains nearly 300 pieces, including a large part of the output of John Bull, William Byrd, Giles Farnaby and Peter Philips.

But there is a special insight provided when this manuscript is on display next to the Museum’s two historical keyboards: a spinetta a tavola or virginal built in Italy in the late sixteenth or early seventeenth century (and thus contemporary with the Virginal Book) and an anonymous Florentine harpsichord from about 1680 (which once belonged to the Italian tragedienne Eleanora Dusa). The harpsichord was restored to playing condition in 1975 and I had the chance to include it on a recording of music from the Virginal Book, thus putting the musicological and the practical together in harness.

And those ‘twenty errors on every page’? My present project is the re-editing for Musica Britannica of all the material in the Virginal Book which has not so far appeared in scholarly modern editions, trusting that by doing so I will manage to appease the ghost of Thurston Dart.