Scored for two violinists reduced to sharing a single violin, the work demands the two players embrace a hitherto unfamiliar proximity: the photograph and the Introduction, below, explain all. The Duo Economique, edited by Christopher, is available now from Edition HH. 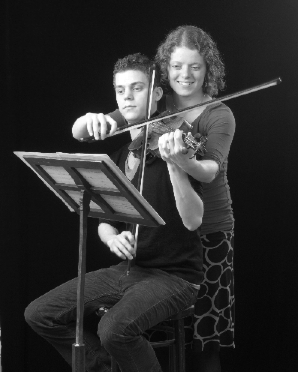 Christian Ernst Graaf (1723-1804) has earned his place in history as a footnote to Mozart's early life; as resident composer to the Dutch court at The Hague, he directed the "Grand Concert in the hall of the 'Oude Doelen'" on 30 September 1765 at which Leopold Mozart advertised "his son, only 8 years and 8 months old, and his daughter, 14 years of age". As well as playing concertos together, it was announced that "all the overtures [i.e. symphonies] will be from the hand of this young composer, who, never having found his like, has had the approbation of the Courts of Vienna, Versailles and London. Music-lovers may confront him with any music at will, and he will play everything at sight".

The young Mozart later complimented Graaf by publishing a set of "eight artful variations" (K.24) on Graaf's Laat ons juichen, Batavieren!, a patriotic song composed for the installation of the 18-year-old Willem V of Orange. Mozart senior wrote to friends back in Salzburg declaring "they are trifles" but, as a good father, adding "should you want to have a copy … you may do so, as they are unusual".

Graaf (originally Graf) came from Rudolstadt in Germany, but spent most of his long life as music director and Kapellmeister at the Dutch court, producing symphonies, chamber music and even, at the age of 79, a successful oratorio celebrating the peace between England and France in 1802. The slightest and lightest of his works must be this unusual Duo Economique, requiring two players, two hands and two bows but only one violin.

The logistics of performance require a certain amount of intimacy (explained below), but the concept of such a duo (whether Graaf realised it or not) was hardly novel. John Dowland had produced and published "My Lord Chamberlaine his galliard" described as "an invention for two to play upon one lute" in 1597, and Tobias Hume produced a "Lesson for Two to Play upone one Viole" in 1603; for this two bows are required and the smaller of the two players is obliged to sit in the lap of the larger player.[1] Among classical composers, Wilhelm Friedrich Ernst Bach devised "Das Dreyblat" for one piano, six hands, where the gentleman sitting in the centre of the trio of players discovers that his part is set at the extreme top and extreme bottom of the keyboard while the other players occupy the middle register.

The first violinist holds the violin and bows near the bridge, playing, for the most part, in third position (or higher) on the upper two strings; the second stands behind and bows nearer the fingerboard, playing in first position on the lower two (occasionally three) strings. In bars 58, 60, 74 and 76 of the Rondo, the first violinist has to use lower strings and lower positions, but in these bars the second violinist is resting and so can simply remove their left hand, since this is not supporting the violin. For the second violinist to play C# on the G string is intimate but possible; the fourth finger is to be avoided – open Ds and As are much easier.