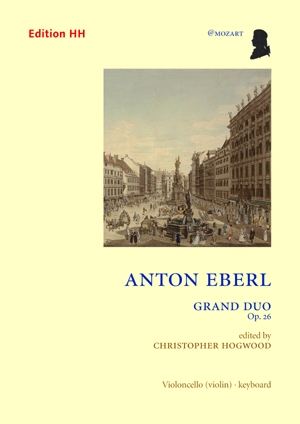 Anton Eberl was held in high regard by his contemporaries, the Allgemeine Musikalische Zeitung commenting in 1807 that seldom had the death of an artist been so widely regretted. Nine years Mozart’s junior, Eberl also began life as a prodigy, giving his first Viennese recitals at the age of eight. Mozart was Eberl’s friend and probably also his teacher; his compositions show a great acquaintance with Mozart’s style which led to repeated misattribution of his own works.

There were few precedents for works for solo cello and piano with a fully written out keyboard part, as opposed to the more familiar cello with continuo accompaniment. The two Op.5 sonatas for cello and piano by Beethoven were published in 1796, followed by several sets of variations, and Mozart left only a fragment of an Andantino for cello and piano. For this combination, Eberl first published Variations sur un theme russe, Op.17 in 1802 and followed with the Grand Duo, Op.26 in 1804.

The Grand Duo creates an entirely new formal scheme for this combination: where a minuet or scherzo would normally be expected, Eberl substitutes the more innovative Rhapsodie; the finale is an elegant and unprecedented Pastorale movement, with episodes in in varying metres. The Duo’s scoring is impressive throughout, with Eberl maintaining a clear balance between the cello and piano contribution, with the cello alternating between high-set melodic lines, powerful arpeggio figuration and the more traditional doubling of the piano’s bass-line.

Eberl also provided an alternative string part for violin, a carefully revised transposition which will be of interest to both cellist and violinist. The violin version contains many markings which either contradict, or, more usefully, supplement, those in the cello part. Both string parts have been included In the present edition, and markings from the violin version pertinent to the cello have been added editorially; however individual players may wish to explore further the differences between the two parts.