February 2005 was a continuous round of travel, rehearsing and giving concerts in Italy and Germany; however, some of the more relaxing moments have involved eating and drinking, and the finding of interesting, quiet and hospitable restaurants is part of the fun of being a travelling musician.

For the benefit of any other travellers who happen to be in these cities and would be interested in the details of establishments that will deliver good food after the end of a concert, here are some new discoveries.

Further down the same street (turn left) is a family restaurant much frequented by members of the Orchestra della Toscana (complete lunch can be a little as €5.50):

The decor is modern steel and glass in an old building close to the Duomo, but with an attached ‘old-style’ bar for snacks and wine tasting. They also sell an ingenious wine-saver — powered by a gas capsule and delivering single glasses from an open bottle which is then sealed with inert gas (great if you have serious intentions of not finishing the bottle)

Milano
First call should be the vast food and wine shop Peck (via Spadari, very close to the piazza Duomo): thousands of cheeses, hams, sausages, coffee beans, jams, olive oils, jereboams of Pétrus, a tea shop and lunch stop, splendid bar for a mid-morning prosecco and newspapers, chocolates and fine breads (some even salted): probably the equal of Fortnum & Mason in Italy, but more familiar.

For central (near Duomo) eating there is the Ristorante Galleria (just inside the Galleria, on the right) which delivers the best ‘people-watching’ in Milan — a constant flow of all types (specially fashion victims) outside the glass windows, and quick one-course lunches (e.g. traditional ossabucco). Leave the Galleria at the other end and turn right for 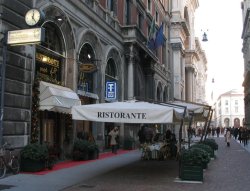 Another family restaurant very well-placed for after-opera audiences from La Scala (once the theatre has really re-opened); a picture of the maestro dining is apparently now on their website.

stays open late (also near the Duomo) and served an unusual pasta form (new to me, at least) called Gramigna

The concert hall for the Orchestra Sinfonica di Milano Giuseppe Verdi is a little south of the Porta Ticinese (Auditorium di Milano, a converted cinema with a very superior acoustic). The nearby lunch-time restaurant can be warmly recommended — it describes itself as “Vineria con piccola cucina”:

Opposite the stage door of the Auditorium is a tempting shop creatively called “Wine Not?” (in English moreover...)

It stays open until midnight, does a Sunday brunch, serves draught prosecco and a fine selection of wines (the owner is quick to prevent you ordering an unsuitable bottle). Best to ring and book, it is often crowded, but always friendly.

Finally a fine old-style establishment hidden a block behind FNAC

A music-free family establishment 2 minutes from the theatre.

Incidentally, all Italian restaurants are now, by law, non-smoking — a rule which seems to have been accepted without complaint by the customers.

Only one establishement broke the rule, and there they operated a locked-door policy; the head waiter asked whether we would mind if “one table smoked because they are friends of the chef”. It transpired that ALL tables smoked and the chef also — but, charmingly, every diner left the table and went outside to take mobile phone calls to avoid disturbing the atmosphere.

Frankfurt
Fewer dining experiences to report from Frankfurt, but in the relatively historical and cosy old part of Bornheim is

which serves tradition snacks with ‘apple wine’ (related to cider); the most appropriate is a dish of cheese with added chopped onion (the addition of onion is described as “mit Musik”) served with dark bread. Also good beer.